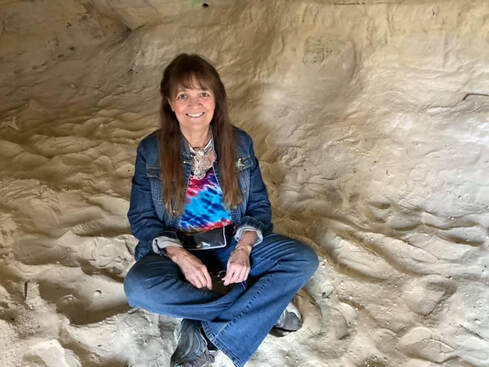 How I connected with what I call Divine Consciousness.

I was raised Catholic as a child, and the God that I learned about was a distant man, who wasn't very compassionate, who sent people to hell for eating meat on the wrong day, was domineering and punishing.  Not someone I was interested in!  As a women, I was left out of the equation.

I remember being 4 years old laying on the ground looking up at the sky. I was taking things away, thinking, what if there were no trees, no birds, no sky, no earth, where is God if everything is taken away? I wondered where God was in this nothingness.  I have been and expansive thinker and visionary since I was young.

From there I went searching for the feminine God. If you look at my art you will see the emerging feminine in many of my images. I discovered Her but felt now my concept was out of balance with no masculine sense of God.

Everything got clear to me in a hospital in Austria in 2016 after a second heart attack.

This is from my journal:
"The Divine Masculine/Father and Divine Feminine/Mother are principles, NOT people.  We have made them people, so we can relate. In doing so it makes it harder to relate and causes separation. The Creator is not anything we can imagine. The Divine Masculine and Divine Feminine together make up the Creation Principle, a force that we can co-create with.  A force we have direct access to. It is part of us and we are part of it.  It is a Universal Consciousness without limitations.

How do we grasp that we were created by a creative force, a commingling of principles, energies, frequencies, vibrations and things we can't understand? In trying to understand we have created separation with The Creator, with ourselves and between each other, Everyone of us contains both masculine and feminine and by embracing that we bridge the chasm, within us and between men and women."

I call this force The Divine Consciousness and this gallery is my attempt at picturing it.