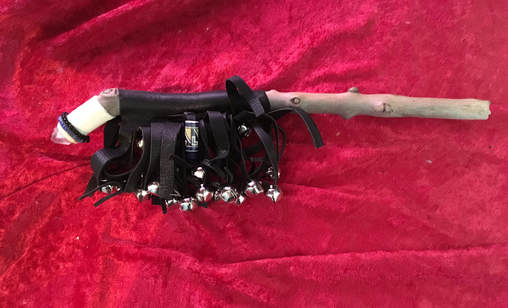 About the Shamanic Bell Rattles

Katelyn began making bell rattles many years ago and later learned that Ancient Celtic Shamans used bell rattles in their healing work. In Celtic mythology, the silver, or bell, branch was a passport to the land of faery and the otherworlds.  This is interesting because Katelyn has Irish roots.  Katelyn’s rattles are the original bell rattles.

Many cultures use rattles as a means of getting the attention of Spirit. I still occasionally use a traditional rattle because it has many very expressive ways of communicating with Spirit.

"The first rituals of humankind were likely accompanied by clapping, stomping, dancing, chanting. The first ritual tools were likely sticks used on other sticks or bones or stones – drums. How long before we hung bones and shells on these sticks and made the first rudimentary rattles? The sound of a bell or rattle is used in ritual to consecrate sacred space, because the sound of many instruments is thought to drive away “bad” spirits and draw “good” ones."

Rattles and bell branches have another quality. Which is that their form lends itself well to decoration- carving or bead work on the handle, artwork on the ‘head’ of the rattle, different styles of “apples” on a bell branch. Which means that they can be adorned with totem signs, ancestral symbols and personalized artwork, all this will all help to keep these connections at the forefront of your consciousness when you are using your rattle.

Also known as a bell branch or apple branch. “Craebh ciuil” is Irish Gaelic for musical branch. A bell branch fits the definition of a rattle in that it is a percussive instrument that makes sound when shaken. Its uses also mirror those of ritual rattles used in different cultures throughout history. It works in a similar manner the Shamanic rattle and the drum. Archaeology has also uncovered "wands" that may have been the bell branches of Druids or Bards.

The sound of the bells is pleasing to the gods and attracts their attention, while at the same time it is offensive to the ears of malevolent spirits who are driven away.

Others might know the bell branch as "the golden bough." The golden bough is a branch from the oak tree that has mistletoe attached to it. In the Britain area the mistletoe berries are white, however in other parts of the world, they are yellow."

Each rattle is individually created to capture a particular energy, using stones, bells, totems and beads and other found objects from nature. Rattles have either a crystal point or shell on the end. They are as unique combination of leather, driftwood and other objects from nature. The average length is 10 inches. They can be used for personal healing, Feng Shui or healing work done with other people.

Katelyn will custom create a rattle for you with energy attributes that you choose. Custom rattles are $99 plus $9 shipping in the US.  Email Katelyn to learn more.